In the span of just a few days, so many things change.  Just this week, the current administration failed in their mission to gut and dismantle the Affordable Care Act, and seem to have succeeded in stripping away discrimination protections for LGBTQ people working in

the federal government.  These things, together with an ongoing barrage of similarly maddening attempts to roll the US right back into the dark ages, bring us swiftly back into the consideration began last week.  It seems that our adolescent conservative faction of Americans are passionately ready to cut off their own foot and pave the way for their own demise in the name of self-righteous beliefs that express their ultimate assumption of entitlement to not only live their own lives according to their values, but to also force others into their small vision of the one and only right way to live.

A reminder of our basis for the discussion, the adolescent conservative insult “libtard,” which is defined by a contributor to Urban Dictionary:

“A libtard wants to live in a fantasy world (in which life is the way that they WISH IT WAS) as opposed to dealing with life the way it actually is. The most idealistic libtard envisions a time when science/technology and Socialism will eliminate all poverty, hunger, war, disease, injustice, unemployment and prejudice… Most libtards subscribe to the notion that “people are basically good,” and build their foundation for activism and “improving the human condition” on that faulty premise… Metaphorically speaking, a libtard is a sheep who thinks that their grasp of diplomatic nuance or metaphysical sensitivity will prevent their flock from being devoured by the world’s Islamic/Communist wolves.”

In part I, we began to consider the things these conservatives believe to be the core of the threatening progressive agenda, and here we continue.  But before diving in, I think it is ultimately telling of the fears espoused by this segment of the population right here in the above definition.  “Fantasy world” would imply that the world is a static place that is the way it is without ever changing – and I can imagine that to many people this may seem true, especially if they feel power 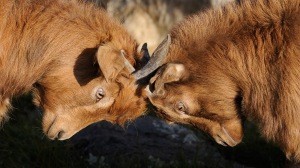 less to affect meaningful change in their own lives.  The idea that people can hold a big vision of a better way and make that happen indeed may sound absurd.  And the elimination of “poverty, hunger, war, disease, injustice, unemployment, and prejudice” may sound like an idealistic fantasy to those who are entrenched in lives that include those very things, and who have had no success in finding a way out of suffering from the effects, but again, I believe that the inability to imagine and subsequently create a situation where these things were fully resolved is ultimately the result of being deeply stuck in an oppressive way of life, and holding a lot of anger and hostility toward anyone who imagines they can transform it.  I also see that for people who are living in oppression, there could be a major injury to one’s pride in suggesting that someone else can figure out and remedy these things, while those who are stuck couldn’t find a way out themselves.  And pride is foolish and stubborn.  Many times, we humans would rather be prideful and uphold our rightness, even to our own detriment, than humble ourselves and receive support and make changes.

And as for the “Communist wolves” ~ considering the number of members of the current administration who are suspected to have ties to the Russian government, the whole argument falls apart instantly.  Now, back to our evaluation of the “libtard” agenda, as told by the adolescent conservatives.

And one more, for inspiration, as we “libtards” have the deep vision, longing, and commitment to creating a new culture, with new ways of living and being with each other that are rooted in justice, equality, love, and kindness.  The seeds we sow may be small, but they are mighty, and we shall persist in the cultivation of this New Earth with the fullness of our hearts, our minds, and our strength.

Mark 4:30-34 ~ And He said, “How shall we picture the kingdom of God, or by what parable shall we present it? “It is like a mustard seed, which, when sown upon the soil, though it is smaller than all the seeds that are upon the soil, yet when it is sown, it grows up and becomes larger than all the garden plants and forms large branches; so that THE BIRDS OF THE AIR can NEST UNDER ITS SHADE.”